Why Apple Displays Retina MacBook Pros Tilted At 70 Degrees In Its Retail Stores?

Did you happen to notice that all of the new Retina display MacBook Pros are positioned at exactly the same angle every morning at Apple Retail stores? This is because Apple store employees who open the store use an iPhone app as a level to tilt all the screens to exactly 70 degrees. Wanna know why? According to an interesting Forbes publication, the main reason why all MacBooks’ screens are slightly angled is to encourage customers to adjust the screen to their ideal viewing angle, in other words, “to touch the computer!”. This is exactly why iPads and iPhones in the Apple Store are all loaded with apps and connected to the Internet because Apple wants you to experience the power and performance of the devices by yourself. 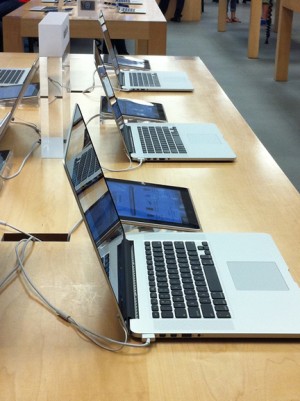 The Apple Store was never created on the premise that people want to buy stuff. Instead Apple discovered that by creating an ownership experience, customers would be more loyal to the brand.

The Apple Store was designed to create an ownership experience from the moment a customer walks through the door. When Steve Jobs gave a tour of the first Apple Store in 2001, he said that all computers were connected to the Internet. “You can go up to any computer and start surfing, go to your personal web site, or do whatever you want to do on the Internet.”

On the other hand, if you happen to walk into a Best Buy store, you’ll notice all the devices are turned off and the screens are black. Similar retailers looking for ways to improve their customer experience, might well start by visiting an Apple Store!