We know that the iPad will go on sale April 3 in the USA. Canadians will get the iPad near the end of April. As for the upcoming iPhone, if history is any indication it should arrive in June/July. That has been the case for the iPhone 3G and iPhone 3GS.

Should You Buy an iPad or the ‘Next’ iPhone?

This might seem like an odd poll question to ask, but I’ve received a few emails from readers asking this very question. It seems some people out there need to make a decision soon: should I buy an iPad, or save my money for the next iPhone this summer?

Here is my take on this scenario, and it will surely differ from yours:

– If you’re currently using a first gen iPhone or iPhone 3G, and are looking to upgrade, get the next iPhone coming this summer
– If you’re an iPhone 3GS owner, you could do without either and just wait for firmware 4.0 (but that’s no fun right?)
– Don’t have an iPhone yet? Buy a 3G version iPad and use Skype to make outgoing calls. You would be able to call Canada/USA for $3/month plus the cost of Pay As You Go Data. You’ll have all the fun of the iPhone OS but won’t have a real phone.
– Don’t buy anything until the next iPhone and 4.0 firmware is revealed.

Poll Time: What Will You Do? Buy the iPad? Buy the next iPhone? Buy Both? Wait?

As for the next iPhone, it will also depend on where you are within your contract with Rogers/Bell/Telus. We know how sticky these upgrades are. That’s why when the next iPhone is released, I’m going to purchase the phone outright without a contract. Freedom is worth the extra price up front.

It’s going to be an exciting time when the iPad is released. I’m looking forward to seeing what apps developers will come up with. As for the next iPhone, I’d hope for the iPad’s A4 processor, iChat capabilities, a larger HD screen, better battery life, and more customization in iPhone OS 4.0. 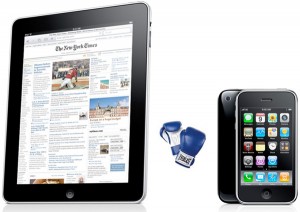