About 14% of Americans would buy an iWatch priced at $350, according to the first ever “Piper Jaffray Watch & Wearables survey”, reports AppleInsider.

It is worth noting that this isn’t the first iWatch survey the analyst firm has conducted and published. This time, however, they seemed to focus on things like fashion and jewelry, and they touched on rumours of an iWatch priced at $350. As it turns out, there is an intention to buy this device, but the percentage of future adult buyers is lower compared to the possible adoption rate among teens. 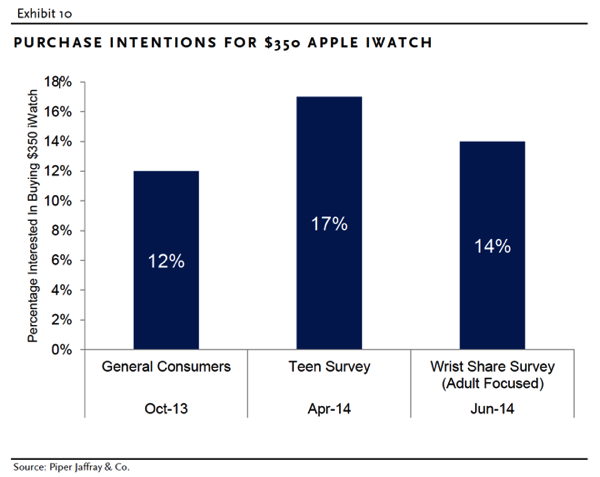 Although the analyst firm polled only 100 individuals with an average age of 32 years and household income of $130,000 (mostly female), it is interesting to put those numbers into perspective by comparing them to previous survey results.

Back in April, after analyzing the results of a 7,500-person survey, the same company found that 17% of teens would jump on an iWatch priced at $350. This is an impressive number, considering that teenagers don’t tend to wear watches.

Last year, however, it was ChangeWave Research who looked into the potential adoption rate of an Apple smartwatch priced at $350. As it turns out, about 19% of the surveyed US consumers declared themselves “likely” to purchase such a device.

So does this mean a lower adoption rate for the iWatch? You may recall that every new major category Apple has entered has resulted in record adoption rates. This could change with the iWatch – if indeed it arrives this fall – but Morgan Stanley’s Katy Huberty and many other analysts are confident of high Apple smartwatch sales.