15 Percent of iOS Devices Now Running iOS 6, According to Chitika

Yesterday Apple release iOS 6 just before 10AM PDT. In just over 24 hours, it appears iOS 6 installs have reached 15 percent of iOS devices, according to ad firm Chitika, reports CNET.

Here’s how Chitika came up with the following graph below, which includes Canadian and U.S. traffic:

To quantify this study, Chitika Insights took a sample of millions of mobile ad impressions coming out of the Chitika Ad network ranging from September 19th to September 20th 2012. The growth rate of iOS 6 was then compared to total iOS Web usage using a time series to illustrate the rate of adoption of the new OS. 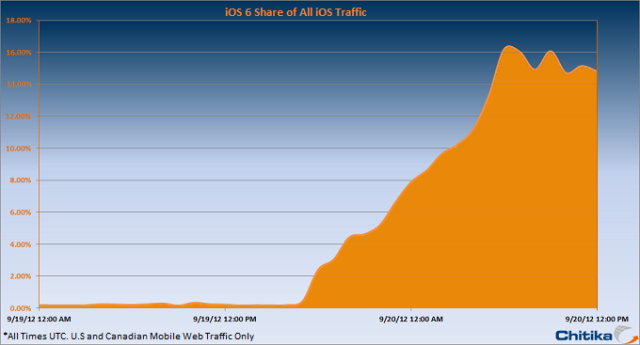 In the past 24 hours, approximately 43% of our visitors are using iOS 6 according to Google Analytics.

Chitika notes the fast level of iOS 6 adoption is something Android’s Jelly Bean failed to achieve, as it only was able to muster up a 1.5% adoption rate–in two months. Now that’s fragmentation when older devices can’t even install the latest operating system, whereas a three year old iPhone 3GS still can get iOS 6.

Have you installed iOS 6? Take our poll below: