If you’re looking for a cheap iPod touch, the older 16GB fourth generation units are on sale at Future Shop in both black or white at $169.99 ($30 off). These are no longer available from Apple’s website and can only be found in the refurbished store for $149–only when stock is available. This iPod touch has a Retina display and is powered by the older generation A4 chip.

The Future Shop listing below is wrong–this model did not release in October 2012 but rather the fall of 2010 (white came later in fall of 2011). 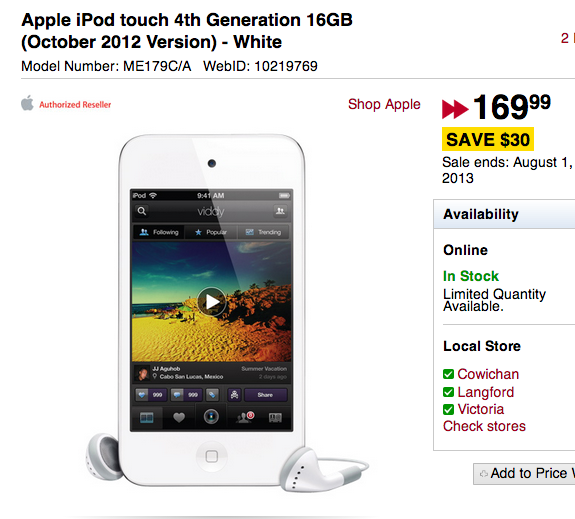 You may recall Apple debuted a newer 16GB iPod touch (but without an iSight camera) for $229 back in late May to bring it in line with the fifth generation models (Lightning connector, EarPods, A5 chip), which eliminated the 16GB fourth generation model for sale.

If you are looking for an entry-level iPod touch and do actually want a rear camera, this might be for you as it’s $60 in savings compared to the newer generation 16GB model. Might be worth it for the kids as a gaming machine or camera.