Despite Apple announcing its sales numbers every fiscal quarter, there’s another huge segment that goes unnoticed–the sale of new and used iOS devices and Macs on eBay.

According to data provided to ComputerWorld, Apple devices have sold $1.94 billion worth in the past 12 months on eBay in the USA:

Nearly $2 billion worth of Apple devices — Macs, iPhones, iPads and iPods — were sold on eBay over the past 12 months in the U.S. alone, according to Apple.

Data mined from eBay’s analytics platform and provided to Computerworld showed that, as with Apple’s own sales, the iPhone dominates and the Mac and iPad bicker over second place.

Here is a breakdown of new and used Apple device sales according to eBay, which acquired the ‘ballpark’ data based on sellers’ keywords. The breakdown of eBay sales closely resemble sales trends from Apple’s quarterly earnings, as they’re dominated by the iPhone: 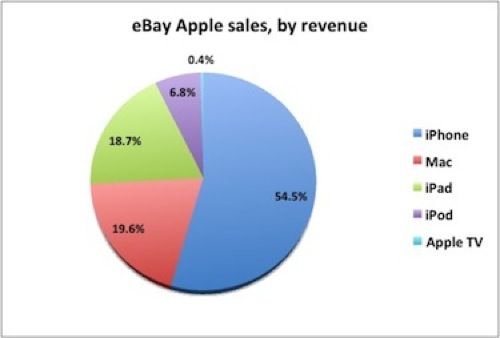 Some countries don’t get Apple products as fast as North America and Europe, and some don’t even get them at all—hence the eBay marketplace becomes the wild wild west during any iPhone launch. Even for selling used iPhones, eBay can be lucrative as those in emerging markets are still willing to pay a premium for unlocked devices in working condition.