2 Year Old Kid Uses FaceTime to Save His Mother [VIDEO] 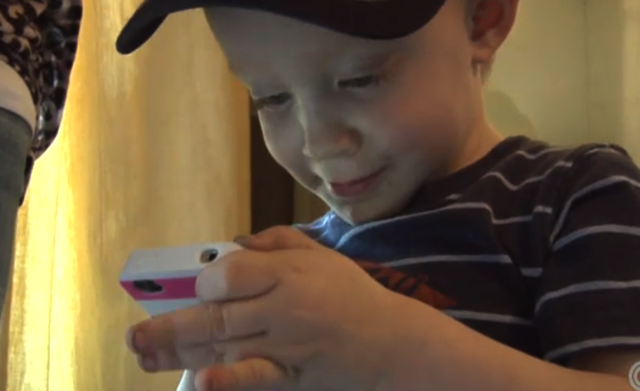 According to an interesting report by CNN, 2-year-old Bentley Toone’s FaceTime expertise allowed him to save his mother’s life. His mother had taken a walk when a foster dog she was caring for attacked one of her own dogs. She tried breaking up the fight but the dog nearly bit one of her fingers off. The toddler rushed to her mother, picked up her iPhone and called her friend using FaceTime for help.

“I begged my daughters to call 911 and they’re four and they were quite afraid to even touch the phone because it was covered in my own blood,” she said Friday from her home in Tucson, Ariz. Toone continued to lose blood and felt like she’d pass out soon. But Bentley saved the day. “Here comes my son from the kitchen bringing me our dish towel,” she said. “He wiped off the blood himself and proceeded to call my friend on FaceTime.”

Bentley, who is known for making prank FaceTime calls, called her mother’s friend Connie Guerrero, who usually ignores the ring thinking its another prank. “Something inside of me just told me that I needed to answer this FaceTime,” Guerrero recalled. “All I could see was his little forehead and I said, ‘hi, Bentley,’ and it was quiet for a little bit and then I hear Laura screaming.” Guerrero then called 911 and Bentley unlocked the door when firefighters arrived.

Head over to this link to watch the video on CNN.

Amazon announced on Wednesday a new lineup of Fire TV Omni televisions, this time with QLED and also its “smartest TV lineup ever.” The new Fire TV Omni QLED Series is available in 65 and 75-inches, with 4K Quantum Dot Technology (QLED) displays and full-array local dimming for up to 96 zones. Dolby Vision IQ […]
Gary Ng
19 seconds ago

Amazon announced an all-new Alexa experience built just for kids today, with the launch of Echo Dot Kids. Echo Dot Kids come with Owl or Dragon designs and a 2-year worry-free guarantee. If your speaker breaks, Amazon will replace it. Also included are parental controls (time limits; explicit lyric filtering) and one year of Amazon […]
Gary Ng
58 mins ago