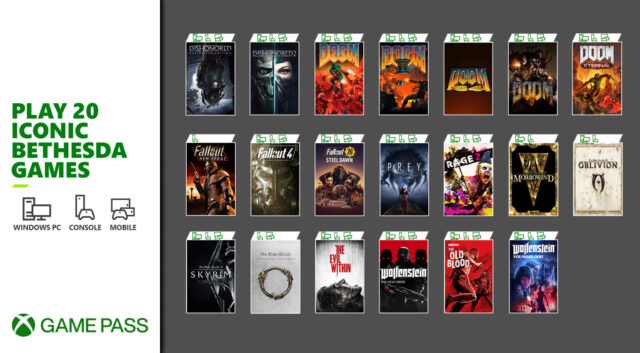 As Microsoft’s acquisition of ZeniMax Media has officially closed, Xbox and Bethesda are celebrating by releasing 20 legacy titles on Xbox Game Pass. Starting today, a slew of games from Bethesda’s iconic franchises will be available through Game Pass on Xbox One, Xbox Series X/S, PC, and mobile through xCloud streaming.

The news announced during the ‘Bethesda Joins Xbox’ roundtable discussion where Xbox and Bethesda lead Phil Spencer, Pete Hines, Aaron Greenburg, and Erin Losi sat down to discuss what the acquisition means for the Xbox Game Studios banner and how Bethesda creatives tackle game development philosophy. In addition, the team revealed that the Xbox Game Pass service would receive a massive boost in Bethesda legacy titles.

Bethesda, as many already know, has developed some of the most iconic franchises in gaming. With a bevy of IP under its umbrella, Microsoft is already taking full advantage of adding the likes of DOOM, Fallout, The Elder Scrolls, and Wolfenstein to its first-party offering.

The span of time these games released range from a year all the way to 2002 with The Elder Scrolls III: Morrowind. However, a select few will benefit from the Xbox Series X and Xbox Series S FPS Boost feature in the future. This will allow older titles to run at a smoother framerate with no work required by the developer. Microsoft has stated that it will share additional details on the FPS Boost-enabled games at a later date.

Apple today released iOS 16 beta 5 and more for developers today. These new releases included some new features, such as bringing back the battery percentage to the battery icon in the status bar on iPhone. Also, for finding devices such as your iPhone from Apple Watch, there’s a new alert sound. Some other minor...
Gary Ng
6 hours ago