According to the annual Internet Trends Report for 2016 presented by Kleiner Perkins Caufield & Byers partner Mary Meeker, iOS has seen just a 2 percentage point increase in market share over the past six years, while Android has exploded from a 4% presence in the industry in 2009 to a massive 81% in 2015. Meeker believes the trend will continue, with iOS projected to see a year-over-year loss of 11% in unit shipments while Android gaining another 7% in 2016 (via MacRumors). 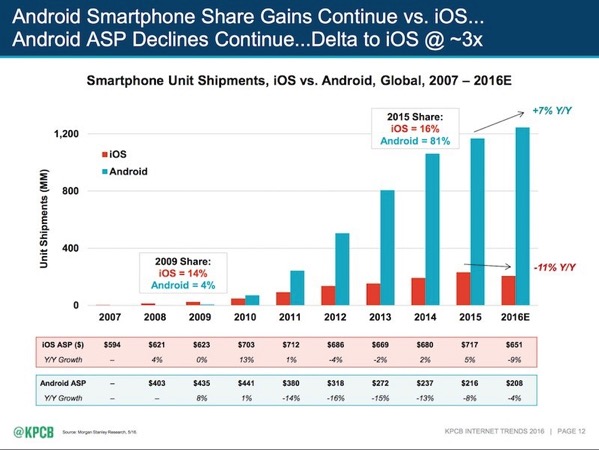 Meeker also predicts that Apple’s average selling price per unit will dip this year for the first time since 2012, mainly due to Apple’s introduction of the lower-cost iPhone SE and the cheaper price tag of smartphones in the company’s expanding global markets. The Cupertino company is predicted to see a 9% decline in ASP, dropping off from $717 in 2015 to $651 in 2016.

Unlike in years past, global smartphone unit shipments are slowing “dramatically,” for both Apple and Android-supported devices. Expansion for the smartphone market as a whole has stagnated, going from a peak in 2010 at nearly 80 percent year-over-year growth, to just about 15 percent in 2015.

Global smartphone user growth is seeing a similar slow-down; understandably, the largest markets with the least amount of smartphone proliferation have the biggest upticks in year-over-year increments. These include Asia-Pacific, which has seen a nearly 20-percentage-point increase in smartphone user share over the last seven years and now accounts for over half of the total market.

I recent years, Apple has been attempting to gain a larger foothold in China, and now looking towards India as its next area of focus.

In partnership with Huish Outdoors, Apple has released the new Oceanic+ dive app for the Apple Watch Ultra, which the company has been highlighting as the closest thing to an ‘official’ Apple dive app. In a detailed hands-on review of the Apple Watch Ultra and the Oceanic+ app, the folks over at DC Rainmaker have...
Usman Qureshi
24 mins ago

WhatsApp has finally introduced a new feature that makes it easier to message yourself, by allowing you to send notes, reminders, and shopping lists to yourself for easy access (via TechCrunch). The feature called ‘Message Yourself’ is set to reach all iPhone and Android users in the coming weeks. The feature was previously being tested by select beta users,...
Usman Qureshi
53 mins ago