Following their 24-inch M1 iMac teardown, iFixit has released its look at the 2021 Apple TV 4K. 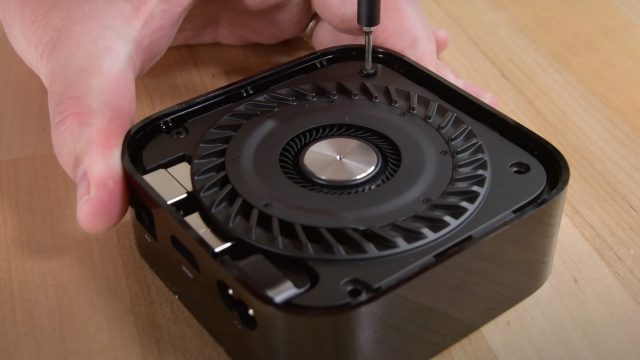 Apple isn’t exactly known for making its products repair-friendly, at least not by unauthorized third-party service providers. There are, however, times when it does seem to diverge from that path.

The Apple TV has been one of its more repairable devices and it doesn’t seem to have changed this year. Unfortunately, iFixit‘s teardown does reveal one blight in that image and it isn’t the Apple TV 4K 2021 at all.

The Apple TV is supposedly “super easy” to open up, requiring an outer casing panel to be popped off and the removal of pins and screws to access the large fan, logic board, heat sink, and power supply.

There were a few pleasant surprises inside as well as from an IR scan. iFixit discovered that the opaque box is actually transparent to infrared light, which means that you don’t have to be precise when pointing the remote. The Apple TV’s fan was also surprisingly connected only by gold contact points with no cable in sight.

iFixit ultimately gave the new Apple TV 4K an eight out of 10 when it comes to repairability. While you’re probably still better off getting your Apple TV fixed professionally if it breaks (especially if it’s within warranty), it’s nonetheless a pleasant surprise to find that Apple has released a product that could be repaired by users if they were so inclined.

The revised Siri Remote — the real star of the show, to be honest — is another matter entirely. After removing two screws near the Lightning port (similar to the iPhone), iFixit ended up prying off all of the face buttons manually before encountering another screw to remove.

After that, the site was able to slide out all of the remote’s internals, which revealed a small battery on the bottom and the rest of its circuity up top. There aren’t any big surprises, but just about everything required some force to remove. Basically, you’ll most likely be buying a new Siri Remote in a few years if the battery dies on you.

Check out the entire breakdown in the video above.

Sometimes, Members of Parliament can work together, especially when it seemingly benefits voters (or when there’s public outrage). According to The Canadian Press, taxpayers will no longer have to pay for the home internet bills of their MPs. The Liberals and Conservatives both agreed to axe members from having taxpayers foot home internet as an […]
Gary Ng
22 mins ago

In celebration of Data Privacy Week, Uber Canada has announced new privacy features for the Uber and Uber Eats apps for consumers. Uber has added industry-first “View as a Driver” and “View as a Delivery Person” features to its apps, which let you select what your driver or delivery person can view. The features are...
Usman Qureshi
32 mins ago

Sony is diving back into the virtual reality well with PS VR2 and I for one have been eagerly awaiting this new generation. The original PSVR showed a lot of promise but was held back slightly due to over-encumbering setup solutions and archaic accessories. PS VR2 feels like a fresh start not only for Sony...
Steve Vegvari
40 mins ago