Apple CEO Tim Cook has earned a spot on the list of TIME’s 100 Most Influential People of 2022, an annual listicle of the 100 most influential people in the world. Cook, who was on the list last year as well, is included in the ‘Titans’ category and is featured on one of five different covers. 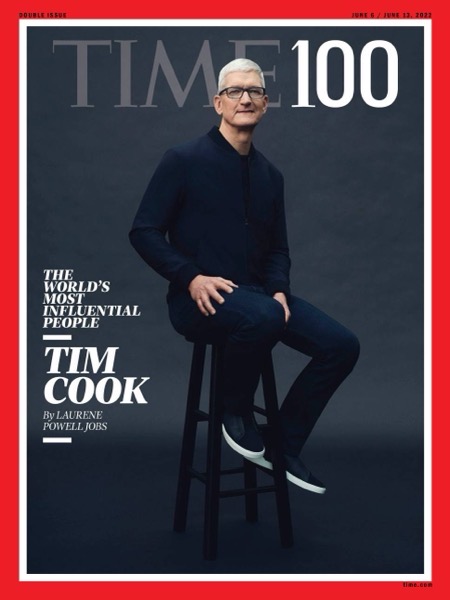 “When our team gets together to choose the TIME100, we have one barometer: influence. Who shaped the year? Who stood up? Who stood out? Influence, of course, may be for good or for ill—a dichotomy never more visible than in this year’s TIME100, which includes both Vladimir Putin and Volodymyr Zelensky,” notes the publication.

This year, Cook’s entry was written by Steve Jobs’ widow, Laurene Powell Jobs, who is also the founder and president of Emerson Collective.

The intense pressure of setting and executing Apple’s progression with deep precision, and of taking responsibility for the company’s effects on society, is almost unimaginable. Yet Tim does it with compassion and discipline, turning to nature to replenish his spirit.

After more than a decade at the helm, Tim has carved out a place as not only one of the world’s most admired CEOs but an exemplar of moral leadership, technological imagination, environmental stewardship, and humanitarianism.

Just two months after its launch, OpenAI's ChatGPT has reached 100 million monthly active users making it the fastest-growing consumer app ever, Reuters is reporting. In comparison, it took TikTok about nine months after its global launch to reach 100 million users and Instagram 2 and a half years. According to a UBS study citing data...
Usman Qureshi
16 mins ago

With a $4.28 billion operating loss in Q4, Meta's Reality Labs division recorded a total loss of $13.7 billion in 2022, the company said in its earnings report (via CNBC). Back in 2021, CEO Mark Zuckerberg said Meta's future would be in the metaverse, a digital universe where people will work, shop, play, and learn....
Usman Qureshi
37 mins ago