According to the latest sales numbers by analytics firm Canalys, iPhone X was the world’s best-shipping smartphone model over the holiday season with over 29 million shipments of Apple’s flagship smartphone during the fourth quarter of 2017. 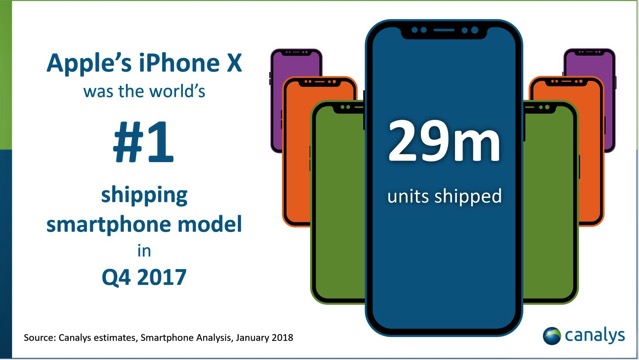 The report notes that China accounted for 7 million of these iPhone X shipments, since the adoption was driven primarily by upgrade demand in “operator-centric markets”.

Older iPhone models are still popular with iPhone users looking for value for money, with iPhone SE, 6s, 7 and 8 models all shipping in good numbers during Q4 of last year.

“The iPhone X performance is impressive for a device priced at US$999, but it is slightly below industry expectations,” said Ben Stanton, Analyst at Canalys. “Apple struggled with supply issues in early November, but achieved a massive uplift in production in late November and throughout December. This helped it meet and even exceed demand in some markets by the end of the quarter. One major benefit to Apple is that customers are increasingly realizing the residual value of their old smartphones, opting for trade-in programs to offset the high price of the iPhone X. But that big price tag, and Apple’s split launch strategy, still had an impact, and shipments were not the fastest ever for an iPhone.”

Canalys Analyst TuanAnh Nguyen also pointed out that Apple is looking at its best performance to date, thanks to the massive changes it made to its portfolio in Q3. “This strategy has hedged Apple’s risk as it upgrades the iPhone, in both design and user experience”, he added.

Nguyen further said that new technologies like Face ID and bezel-less displays, help to justify the US$999 price tag and also maintain competitiveness with Samsung, Huawei and Google.