According to recent tests performed by MacStories’ Federico Viticci, Apple’s new 29W USB-C power adapter is found to charge the 12.9” iPad Pro 2.5x faster as compared to the 12W power adapter included in the iPad Pro box. Both the adapters were tested with same baseline settings i.e. a 12.9-inch iPad Pro in AirPlane Mode and Background App Refresh disabled. 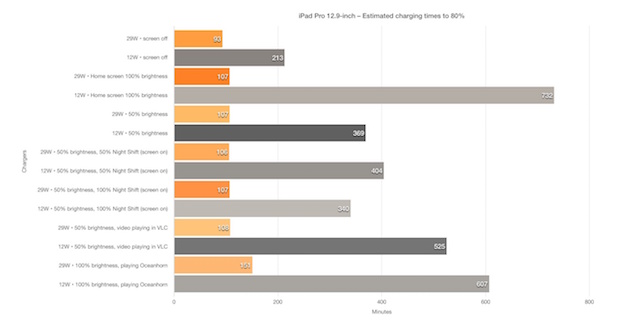 The 29W USB-C power adapter with fast charging on the iPad Pro isn’t only capable of quickly charging an iPad Pro while its screen is turned off – most notably, it can both sustain and power the device considerably while it’s working hard used at full brightness. The 29W adapter is remarkably consistent in battery gains in a variety of conditions and it dramatically reduces the amount of time required to charge the iPad Pro.

The performance gap between the 29W and 12W power adapters is simply too big to ignore.

So if you are a 12.9” iPad Pro user who wants to spend less time charging the device and end up with more battery, more quickly, then the 29W USB-C power adapter seems to be a worthy investment.

Apple is currently on track to double iPhone exports from India by March 2023. This pace was first kickstarted in April and is continuing as India proves to be a major asset in Apple's diversification of its supply chain. In the five-month span since April, Apple has gone on to cross the $1 billion mark...
Steve Vegvari
58 mins ago