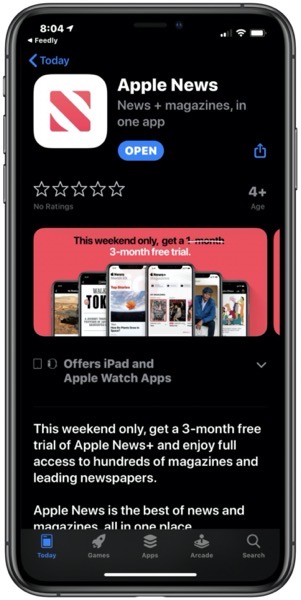 If you haven’t tried Apple News+ yet, you can get a 3-month free trial this weekend, instead of the usual one month.

The Apple News app description reads, “This weekend only, gets a 3-month free trial of Apple News+ and enjoy full access to hundreds of magazines and leading newspapers.”

Apple News+ costs $12.99 CAD per month in Canada and offers access to over 200 magazines, partial digital access to The Toronto Star, plus The Wall Street Journal.

Apple News+ launched in Canada back in March. You can save 20% off this Apple subscription by funding your Apple ID with discounted iTunes cards from Costco, available now.

Apple is also offering six months of free Apple Music to new subscribers right now as well (some former users are able to get three months, too).

As the volume of trips to and from post-secondary campuses across Canada is doubling, Uber is sharing some back-to-school trends highlighting how students are relying on ridesharing to get around on and off campus. "Now that classes are back in full swing, it’s a great time to remind students how to use Uber app features...
Usman Qureshi
18 mins ago

Apple, Google, Amazon, Meta, and Microsoft have all joined the University of Illinois (UIUC)'s Speech Accessibility Project to improve voice recognition algorithms for users with disabilities that affect speech and those with diverse speech patterns — reports Engadget. The tech giants are also joined by nonprofits like The Davis Phinney Foundation and Team Gleason in...
Nehal Malik
52 mins ago