This week Apple released 3 new iPhone Ads on their USA iPhone Gallery site. Titled “Read”, “Fix” and “Check” they feature three Apps each.  I thought I’d give you an overview of the Apps featured and my impressions.

Yelp
Cost: Free
Brought to you by Yelp.com, an App to find local Restaurants and Businesses and read user reviews.  I was impressed that it included Canadian locations and reviews. However, it does still show Distances in “miles” Best of all it’s free! Check out my screenshots below: 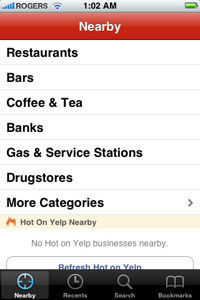 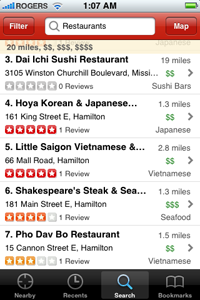 OsiriX
Cost: $19.99
OsiriX is a companion application to OsiriX for Mac which is an interactive visualization program designed for display and analysis of medical images. If you’re already using OsiriX, you might find this very helpful, for more details about the program see OsiriX-Viewer.com.

Classics
Cost: $2.99
Brought to you by the wonderful guys at TapTapTap, this program offers some of the worlds best written works (such as Pride & Prejudice, Alice in Wonderland and Dracula) in an intuitive interface that offers very book-like reading. Looks very interesting and definitely worth the cost. More details at ClassicsApp.com.

Rocket Taxi
Cost: $1.99
THE iPhone App you’ll wish you had when you get stranded after a night of partying, two towns over. The folks at Edovia Inc know what they’re doing with Apps, as they have four others, all geared around travel and locations. What sets this App apart from, say Google Searching ‘Taxi’ in Maps, is that the listings for the over 10 thousand cities (including Canada!) taxi companies are stored directly on your device, so even if you have no internet connection you’ll still be able to call someone to come pick you up. Additional features include rate estimator and a favorites list. See more details at the Rocket Taxi site.

Tipulator
Cost: $0.99
No longer officially at TapTapTap App, it was created by the same guys as the Classics App above. I personally have never had difficulty calculating a tip (or using a calculator to do so, at least). But I’m certain that if I had this App on my phone I’d use it first. Great design, and certainly a fun App. Might make a great gift for someone you know who’s terrible at Tipping.

MultiLevel
Cost: $1.99
This App does exactly what it states, turns your iPhone into a Level. I just wonder why someone might pay $1.99 for this App, when iHandy Carpenter‘s Level is free on the App Store, just search ‘iHandy Level’. I spent a good 5 minutes running around checking my bookshelves and art work. Apparently only my kitchen counter is not level!

SnowReports
Cost: $1.99
I don’t ski, or snowboard, or very much like winter at all. But I did have a friend once who obsessively checked the snow report for Blue Mountain and Mont Tremblant. Checking two sites it’s a big deal, but what if you live in Banff? or Whistler? Well, this App is perfect for you. And, I’m happy to report it’s very Canada-Friendly. Offering ski conditions for resorts in Alberta (7), BC (18), Ontario (9) and Quebec (17).  No wonder Gizmodo chose it as it’s Most Favorite Ski/Snow Resort Report iPhone App. Check out more details and such on Eddit.com’s Site.

Lose it!
Cost: Free
Well we’d gotten this far, but it seems that it’s inevitable that at least one of the Apps Apple featured in their ads wouldn’t be available in Canada. It’s unfortunate too, because this is a really great App. Lose It! helps you track not only your calories but many other aspects of your diet. It also helps you keep track of your exercise and goals. You customize it to your specific needs and puts you on a Budget.  It has an entire database of calorie amounts including major restaurants (well, fast-food anyways), and calculates your calories burned by exercise. Seriously no math involved. I highly recommend this App — and it’s the perfect reason to Set Up A US iTunes Account in Canada.

G-Park
Cost: $0.99
In case simply taking a Photo with your iPhone  isn’t enough of a memory boost to remind you where your car is parked, you can always use G-Park, which will give you turn-by-turn directions (in Google Maps) back to your car. Of course, you can also take a photo.  It could be used for any place-to-place navigation, finding your way back to anywhere, so could make a great gift for travelers. Not much more info on PosiMotion.com, also iTunes Reviews suggest it might not work in Canada.

So that’s it. The roundup of Apps that Apple seems to think best represent the capabilties of the iPhone. Again, these ads are available to view on the USA Apple Website under the iPhone Gallery, not on Apple.ca. I’m very interested to see if anyone else has tried these Apps out – or found similar ones, let us know!