Looking to stock up on some iTunes gift cards? Walmart stores in Canada currently have a 20% off sale on $50 cards, bringing them down to $40. These iTunes gift cards can be used to fund your iTunes account to buy apps, music and more. Some readers have previously jumped on a few of these cards to save on higher priced software from the Mac App Store. The sale is from May 2-10th and the cards are available in stores.

iTunes gift cards periodically go on sale at numerous retailers such as Future Shop, Best Buy, HMV, Safeway etc. What are you going to buy today? 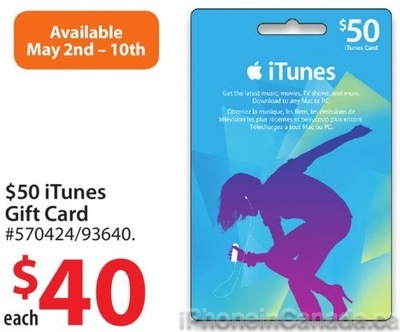 Thanks for the tip Mark!