Apple has updated their App Store distribution page to indicate iOS 10 adoption has reached 76% of devices, based on App Store usage as of January 4, 2017. 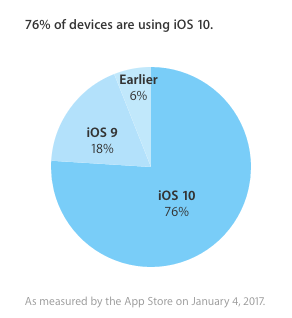 Last year, iOS 9 reached 79% of devices in March, so this adoption of iOS 10 at 76% in early January suggests the pace has been much faster compared to the previous mobile operating system.