American Live Wire reports, in Maryland an 800 pound Apple Store door fell on a customer, breaking his pelvis. The man who has not been publicly named, was reportedly shopping at an Apple Store in Bethesda, Maryland when the door fell on top of him. 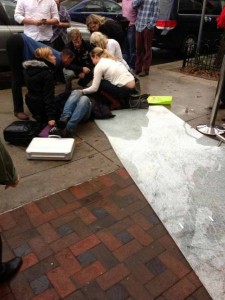 Caption from Reddit: “The 800lb door at the Apple store in Bethesda, MD fell on my friend, breaking his pelvis yesterday. Apple hasn’t made any attempts to get in touch with him.”

According to his friend, who posted the above photo on Reddit, the doors were only installed a few days prior to the incident. His friend, who goes by maxrezn on Reddit, says Apple should be responsible and pay for all the damages. He also stated, a lawyer has already been found and he plans to sue the store for his broken pelvis.

“Someone asked him last night what insurance he had. He answered “Apple Care” but doesn’t remember that.”

Apple has yet to make any comments concerning the incident.