Apple updated its App Store Distribution page this evening to reflect 90 percent of devices are now running iOS 7, based on App Store usage over a seven day period ending on July 13, 2014. 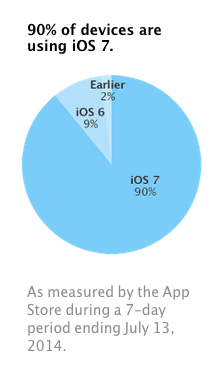 To put these numbers into perspective, only 17.9% of Android devices are running the latest software, KitKate 4.4 as of July 7:

During the company’s Q2 earnings call back in April, Apple said 87% of devices were running iOS 7, so that’s a 3% jump in just under three months. Apple seeded iOS 8 beta 3 to developers last week, with the final public release coming this fall.