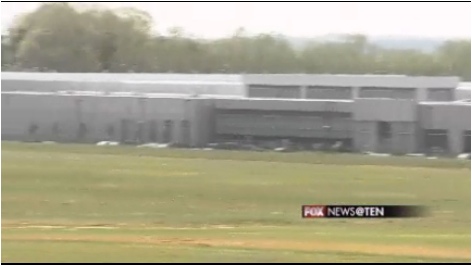 It is well known that Apple has created a $1 billion dollar data centre in North Carolina. Speculation about the use of this facility had led to rumours of a cloud music service and possibly a streaming video service, along with cloud storage for MobileMe.

Recently, a local Fox News affiliate in Maiden, North Carolina, visited the site of Apple’s 500,000 square foot facility, for a more detailed look at the site. They filed a ‘story’ about how some locals believe this facility is going to be more than just for iTunes. As per CNN Fortune:

There’s so much wrong with Fox News’ story that we almost don’t know where to start. (Did anybody ever think it was just for iTunes?) But thanks to its camera crew, we do get to meet aptly named Bill Wagenseller, the real estate guy who shot the first flyover, and Scott Millar, who is introduced as a Wall Street analyst but is really president of the Catawba County economic development corporation. Although the county’s building inspection office still hasn’t received any expansion paperwork, Millar likes the rumors that Apple might be doubling the size of the facility, from 500,000 sq. ft. to 1 million

This data centre in Maiden, NC is massive. We don’t know what Apple has planned, but expect it to be something ‘magical’. Any sort of announcement would be fitting at WWDC, or at Apple’s September event, where iPhone 5 might be revealed.

What are your predictions about the future use of this data centre?