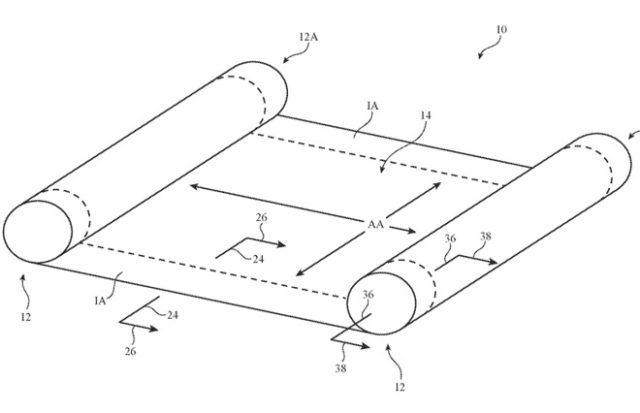 While Apple has reportedly patented a foldable iPhone in the past, a new patent suggests Apple has its eyes set on developing a rollable iPhone as well.

Reported by AppleInsider, a new patent from Apple was filed as US Patent No 10,602,623 under the name “Electronic devices with flexible displays”. The patent in question is described as “A flexible display may be wrapped around one or more rollers” and from the included images, it looks like an old parchment scroll.

While looking like it’s pulled from Ancient Egypt, the patent is designed to overcome many of the hurdles seen in developing a foldable smartphone with a hinge. From the patent’s description, Apple hopes to achieve a working device with a screen that can be pulled from its chassis. As the patent explains: “In a stored position, the flexible display may be wrapped around a storage roller.” The two ends are designed to hold and house the screen, rather than be a part of the physical display.

From the patent, the rollers would help keep the screen straight and in place to avoid damaging the integrity of the screen over a length of time of use. Apple hopes to make sure the device is usable at all times. While the screen is rolled up withing the housing chassis, “A flexible display may be viewable through a transparent housing window before and after the flexible display is pulled out of the housing,” explains the patent.

As one can imagine from the troubles foldable phones have experienced, a rollable phone with the working display may not be an easy feat to achieve. In order to do so, Apple is considering a display that “may span the bend axis”. As the patent describes, “To facilitate bending about the bend axis, the display may have layers such as a display cover layer with grooves or other recesses. The recesses form a flexible portion in the display layer.”

Scott A. Myers, an inventor with more than 150 patents under his belt, has been given credit for the patent.

Whether or not a rollable iPhone hits the market is still up in the air. Seeing as though other major manufacturers have struggled with foldable phones, it appears as though Apple wants to explore every avenue in order to advance the smartphone market.