In a recent set of GL Benchmarks, Anandtech (via MacRumors) has revealed how an A5 powered iPhone 5 / iPhone 4S would have a much superior graphics performance than all the current smartphones in the market. As most of the rumors have already indicated that the nee iPhone is going to sport the same dual-core A5 processing chip (replacing the older A4) as the one in iPad 2 which incorporates a much faster graphics processing unit (GPU) as well. According to Apple, iPad 2 has up to nine times the graphics performance as the original A4-powered iPad. 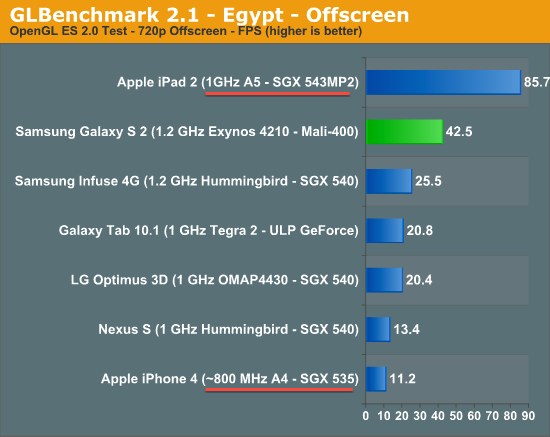 As stated by the source:

Graphs clearly shows how much faster in this the A5’s GPU is as compared to the A4, at least with respect to certain graphics performance. The results may not be exact, as Apple could underclock the new iPhone’s CPU as compared to the iPad 2, but the results should be somewhat representative.

Apple is getting ready to announce the new iPhone on Tuesday, October 4th at its Cupertino campus.