Kishonti Informatics’ latest GFXBench OpenGL ES 2.0 and 3.0 benchmarks have revealed that Apple’s new A8X Application Processor in the iPad Air 2 is not only significantly faster than other Android tablets in CPU tasks, but also smokes Google’s new HTC-built Nexus 9, powered by the Nvidia “Denver” Tegra K1 Application Processor in terms of graphics performance (via AppleInsider). 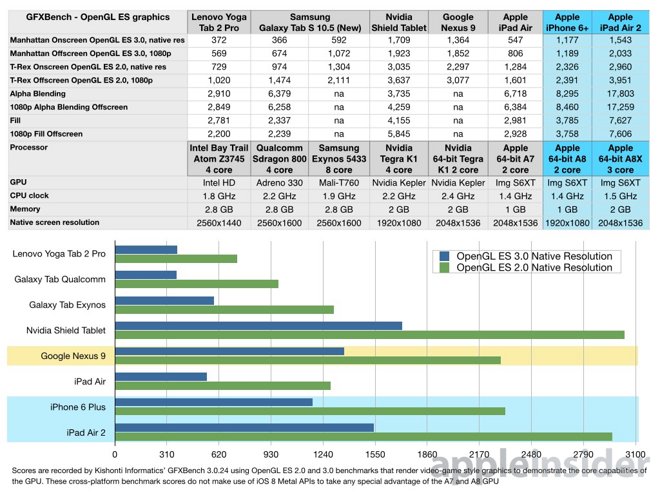 So while Google seems to be discounting the Nexus 9 by $100 over the cost of the cheapest iPad Air 2, it surely won’t be matching Apple’s larger capacity options or Touch ID, and the significantly superior performance of A8X chip.

Netflix has announced today they are rolling out the ability to great game handles, which are public usernames that can be used across the company’s slate of mobile games on iOS and Android. Supported games will have leaderboards such as Rival Pirates, Dominoes Café and Lucky Luna. How to create your Netflix game handle? It’s […]
Gary Ng
53 mins ago

Apple today started rolling out iOS 16.1 beta 3 for developers, with a public release of the build expected soon. YouTuber zollotech rounded up all of beta 3's changes in a recent video. iOS 16.1 beta 3 comes with a modem update that could resolve connectivity issues for users that were facing any, and other notable...
Nehal Malik
57 mins ago