ABI Research: iPhone 5s is the No.1 Smartphone Around the World 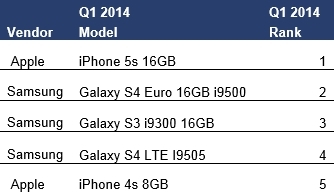 According to the technology market intelligence company ABI Research’s latest report, Apple’s flagship iPhone 5s is the number one premier smartphone around the world (via Business Wire). The study shows that Apple and Samsung account for the majority of the top 20 smartphone models sold worldwide in Q1 2014, with Samsung Galaxy S4 coming in at second spot. Interestingly, Samsung’s flagship S5 failed to even make the top 5 smartphones list.

Sony, LG, and for the first time, Xiaomi make up the rest of the top 20, with Huawei dropping out. “The much talked about Chinese vendor Xiaomi’s top device by shipment volume is the Redmi, which is now available outside of China, at a very affordable $130,” added Spencer.

ABI Research pointed out that other smartphone vendors are struggling to compete with Apple and Samsung’s huge flagship device marketing budgets, “both above the line and in channel”. The analyst firm however expects Huawei and HTC to bounce back in to the top 20 after the launch of their flagship devices the HTC One M8 and the Huawei Ascend P7 in the second quarter of 2014.

Last week, comScore also confirmed that Apple is continuing to beat Samsung in smartphone sales across the U.S., ranking as the top OEM in the region.

Google appears to be working on a new web browser for iOS based on the tech giant's own Blink engine instead of Apple's WebKit, in violation of the App Store Review Guidelines — reports The Register. The in-development browser was referenced in a recent Chromium bug report, but Google says it won't actually release it....
Nehal Malik
24 hours ago