A new Apple Watch band makes it much easier and comfortable to work out with your Apple Watch. 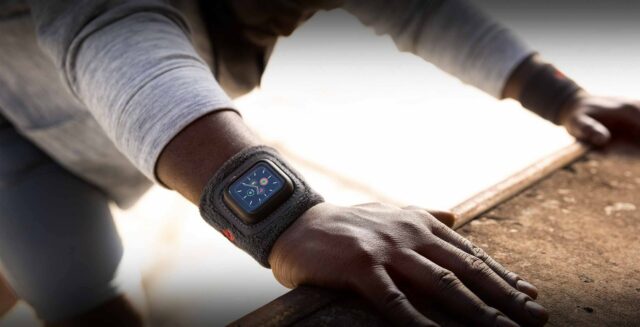 Many people aren’t fans of the various Apple Watch bands available designed for working out. The ActionBand, a new sports band from Twelve South, combines the comfort of a sweatband and the convenience of a watch band.

According to a new press release from the company, the ActionBand is a terry cotton band that sits tight on your wrist or forearm and has a frame for you to slot in the watch part of your Apple Watch, allowing for users to wipe their sweat while working out, for example.

“ActionBand is the world’s most comfortable, wrist-friendly way to work out with your Apple Watch,” explains the company. @Seriously. These soft, flexible terry cotton bands hug your wrist, absorb sweat and keep your hands dry while you close your rings. ActionBand has a protective frame to keep Apple Watch safe, secure and pressed against your skin to track your progress. By dedicating ActionBand to your Apple fitness routine, post workout, your favorite Apple Watch band will still be clean and dry. How refreshing is that? ActionBand includes one pair of machine-washable wristbands, one with an Apple Watch frame, one without. Spoil your wrist.”

The frame is designed in such a way to let users access the Digital Crown and the side button, so one won’t have to rely entirely on the touchscreen if you need to navigate around your watch while working out.

One of the most useful aspects is that to clean a pair of the sweatbands (when you buy the ActionBand, you get one with an Apple Watch cradle and one without), Twelve South says you can just toss them in the washing machine, and use them again.

A pair of Twelve South ActionBands ships for $29.99 USD and is compatible with Apple Watch Series 4, 5, 6 & SE, with the company claiming that Series 7 compatibility is coming soon.