Activation Lock, the anti-theft “kill-switch” introduced by Apple in 2013, was praised by San Francisco District Attorney George Gascón, and New York Attorney General Eric Schneiderman. Fast forward to today, and the Wall Street Journal has looked into the effectiveness of the kill-switch and found that it is showing promise in reducing iPhone theft, but some thieves still aren’t deterred by this security measure. 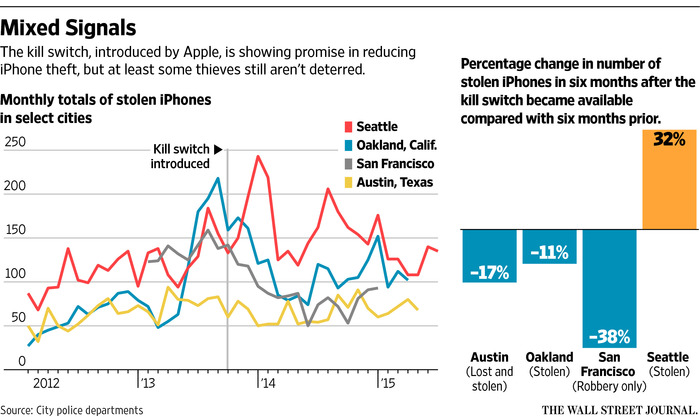 According to data collected by the Wall Street Journal, iPhone thefts and robberies leapt by more than 30% in Seattle, 40% in San Francisco, 24% in London, 17% in Austin, and 11% in Oakland in the six months following the introduction of Activation Lock.

Consumer Reports, on the other hand, estimates a significant 1-million-unit drop in smartphone theft for 2014, compared to last year. According to their data, in 2013, consumers reported 3.1 million stolen smartphones, and that number dropped to 2.1 million a year later.

Of course, the main question remains: Will smartphone theft go away? Gascón is confident, that it won’t. “Will it go away 100%? Probably not,” he said. “What it is doing is reducing it so substantially that it’s not the epidemic that we saw.”

In the light of online services promising to make “bricked” phones usable again, smartphone theft will is here to stay.