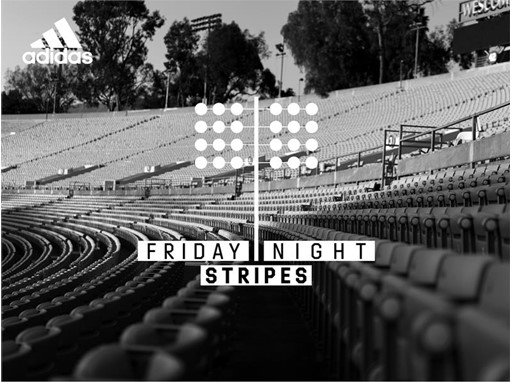 Today, Adidas and Twitter announced a partnership that will create the first-ever live streaming series of high school football games.

Featuring nationally ranked teams, including California, Nevada, Indiana, Georgia and Florida, “Friday Night Stripes” will feature an 8-game series that starts on September 7 and continues through November 9. In a statement, VP of Brand Activation for Adidas Kelly Olmstead said:

“From grassroots to the NFL, adidas is ever-present in football culture and being digital first is everything when it comes to connecting with our consumer. We’re excited to be the first brand to live stream high school football games on Twitter and revolutionize the way fans can experience the game.”

In a statement, Head of Sports Broadcast Partnerships at Twitter Andrew Barge said:

“High school football fans view Twitter as an indispensable tool to follow what’s happening — whether it’s the national recruiting stage or their local communities, every Friday night, we see players, teams, coaches, alumni, and fans embrace this passionate culture. We’re thrilled to partner with adidas and Intersport to help fulfill this massive and untapped opportunity. Both have established credibility as creators in the high school sports arena, and with Twitter’s engaged audience, we’re excited to deliver eight live games that celebrate the unique, community-based passion for high school football on a national level.”

The “Friday Night Stripes” series is the latest example to highlight how Twitter and Adidas continue to innovate in the digital space. Live streaming for each game will be available in markets around the world, including Canada and the United States. Users can gain access while logged into or logged out of Twitter via @adidasFballUS on computers, tablets and mobile devices.
The live streams will be accompanied by a full Twitter timeline that features real-time conversations that will help create an even more immersive experience.