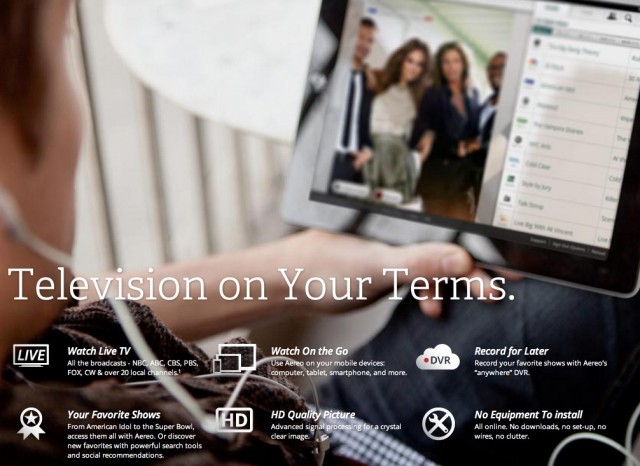 Live TV is something that has alluded the iPhone, while other smart phones seem to be able to run it with no problem. Some carriers offer a live TV app on Android phones, streaming content from the provider’s own cable TV service. What would be really great is live TV from all the networks streaming over the internet for all to access. Well, there is a company in New York City doing just that.

Aereo has been broadcasting live TV over the internet for a while now, but the networks took them to court siting copyright infringement. A New York court has just ruled in favour of Aereo, allowing them to continue their service. The Judge stated that this service is no different than if a customer bought their own DVR to record free TV and watch it later.

How the Aereo service works, is they basically rent you an antennae, located at their headquarters, which picks up local New York free television stations, and then they broadcasts your signal over the internet for you to receive on your iPhone or iPad (or any device that has interent). They even offer a DVR service, where you can record programs and watch them back any time.

Right now, this service is only available in New York City. They started off with 100 customers, and have grown to 3500 customers in just the first year. Their website doesn’t mention any plans to expand the service, but It would be great to see some companies in Canada copy this business model.

Apple today announced the winner of its inaugural Apple Podcasts Award for Show of the Year. The honour went to Slate Magazine's critically acclaimed narrative history series, Slow Burn, for its latest season, which covers Roe v. Wade. Published throughout June 2022, the four-episode season explores the events leading up to the landmark 1973 Supreme Court...
Nehal Malik
20 mins ago