By now everybody knows AirPods missed their October release timeline, as Apple delayed the wireless headphones, citing they just weren’t ready yet for sale.

Last week, analysts at Barclays claimed AirPods would go into production in December, based on information from Apple’s supply chain in Asia.

Now, we may have further evidence a December launch for AirPods is imminent, if the latest product listing from Alza, the largest Apple reseller in the Czech Republic, is to be believed, as spotted by Czech Apple site Letemsvetem.

The company’s listing for AirPods notes a December 2016 date, but definitely take this with a grain of salt: 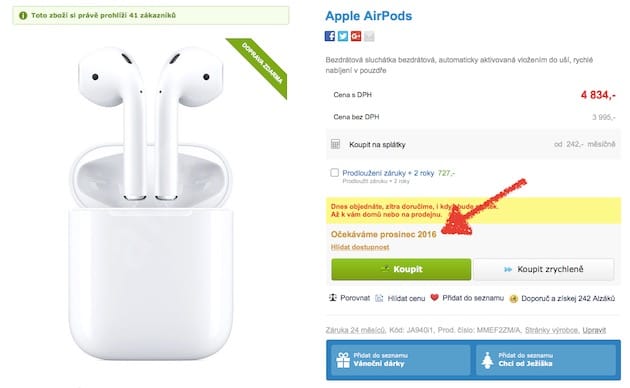 Meanwhile, we’re still waiting to see if information from German reseller Conrad is going to come true, as one report claimed AirPods would launch later this week.

When AirPods go on sale in Canada they will retail for $219. Are you picking up a pair? These may be the must-have stocking stuffers for Christmas (and the most expensive).

Apple has shared a handy video on its YouTube support channel, explaining how you can add video effects when using Continuity Camera with iPhone on a Mac. If you’re using Continuity Camera with a virtual conference app or FaceTime on your Mac, you can add these video effects from Control Center while you chat. Center Stage...
Usman Qureshi
13 mins ago

The World Surf League (WSL) has announced its integration of the Apple Watch as the official wearable equipment of the WSL. This introduction marks the first time Apple Watch will be used as official competitor equipment in a professional sports environment. Throughout the Championship Tour (CT) season, elite WSL CT athletes will get access to...
Usman Qureshi
25 mins ago

The folks over at MacWorld have compared Apple’s latest M2 Pro and M2 Max processors with every other Apple silicon found in the iPhone, iPad, and Mac lineup. "Understanding the performance differences between each chip will help with your buying decisions, especially when you’re deciding between iPhone 14 or MacBook models.” To find out how...
Usman Qureshi
37 mins ago