As highlighted in an extensive blog post by musician and software developer Stephen Coyle, Apple’s latest noise-canceling AirPods Pro seem to offer a significant improvement in Bluetooth latency as compared to the previous generation AirPods (via Reddit). 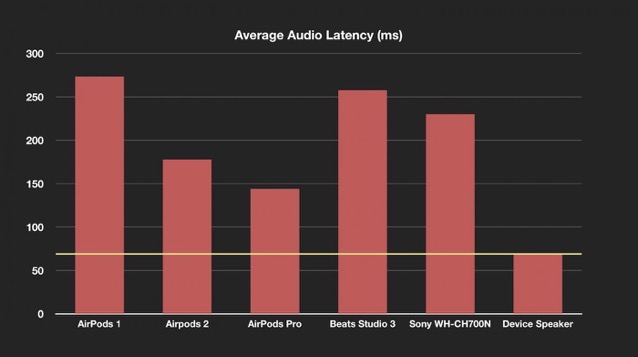 Coyle notes that latency is a problem for sounds that are “unpredictable,” such as user-initiated sounds, sound effects in games, and more, and is not a problem for video playback.

Apple has improved Bluetooth latency from 274ms to 178ms from the first to second-generation AirPods, whereas the AirPods Pro take it down even further to 144ms. While a 130ms reduction may not seem like a lot, the “perceptual difference from this makes the AirPods Pro tantalizingly close to seamless,” writes Coyle:

“Keyboard clicks are near enough to their corresponding keypresses that they feel like they’re actually related to them, not just the cacophony of blips they had seemed before. Tapt is playable, but only just; there’s still additional cognitive load caused by the delay, which I’m sure affects other rhythm-based games equally, and risks upsetting the playability of games that rely heavily on audio cues. However, it’s a lot better, and it looks like things are heading very much in the right direction.”

To learn more about the methods Coyle used to measure the AirPods Bluetooth latency, hit up the source page.