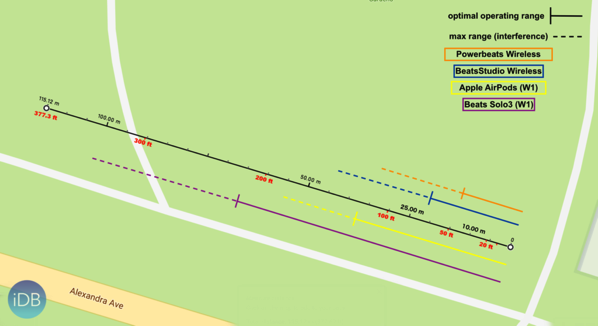 The folks over at iDownloadBlog have conduct a little test to compare the operating range of AirPods, Beats Solo3 and two wireless non-W1 Beats headphones, to see if Apple’s W1 chip actually has an effect on the operating range. The headphones were paired with an iPad one after another, and then a bee-line was made for the opposite direction in order to obtain the maximum operating distance attainable for each.

“I set out to determine two things: the maximum optimal range of the headphones (music plays steadily, no dropouts) first, followed by the absolute maximum range (tolerating interference and dropouts) second. Afterwards, the W1 chip headphones will be put through their paces. At this point I’m still taking bets as to who will go the farthest.”

To assure repeatability of the outcome as much as I can, the following measures were taken:

The Beats Solo3 headphones won the contest by a significant margin, with maximum operating range of 328ft., followed by the AirPods (180ft.), Beats Studio Wireless (147ft.) and PowerBeats2 (110 ft.).

For more details about the testing process, head over to the source page.