According to a report by CBC News, the latest data from Alberta Transportation has revealed that men are being ticketed nearly twice as often as women for distracted driving in Alberta. However, the researchers say that the number does not indicate that men are more prone to fiddle with their phones behind the wheel than women. Of the 27,417 distracted-driving convictions in the last fiscal year, 65.5% involved male drivers, which means 11.1 convictions per 1,000 licensed male drivers, compared to a rate of 6.5 for females. 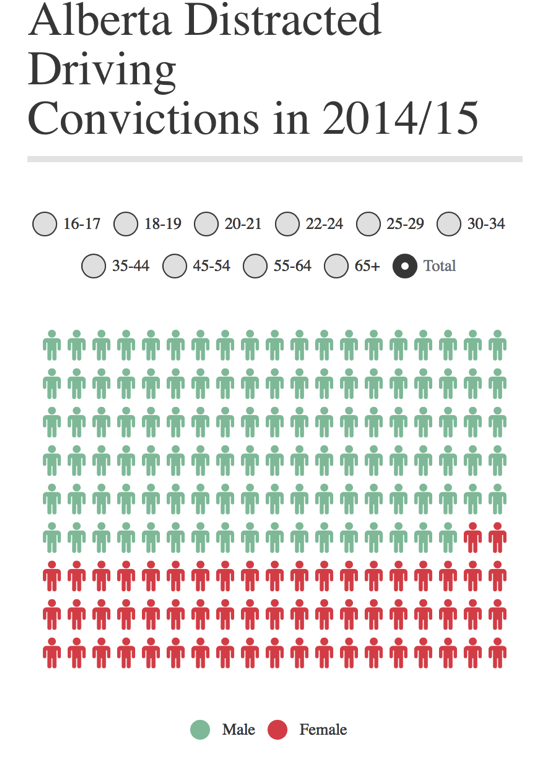 Doug King, a justice studies professor at Mount Royal University, says that there are many other factors that could influence both the total convictions and the conviction rate for each gender. He said that the numbers present an interesting “snapshot” but don’t say for certain one gender has a tendency to drive while distracted more than the other.

Additional factors need to be considered, he noted, particularly how much total driving each gender does. “Does the average male driver in Alberta drive more that the average female driver?” King said. “Then there’s the other question: Is there a gender difference in frequency of driving? So not just how much you drive, but how often you drive.” Abu Sadat Nurullah, PhD candidate in sociology at the University of Alberta who published a research paper on distracted-driving demographics in 2013, agrees. “There’s a lot of other factors involved in this,” he said.

Study has also found that while people aged 35 to 44 were most likely to report using a cellphone while driving, the highest conviction rates in the Alberta Transportation data were among slightly younger drivers. Furthermore, 98% of convictions since the law was introduced have been for using a mobile phone or other type of electronic device while behind the wheel. As of 2016, the fines for those caught driving with a mobile device in Alberta have been increased from $172 to $287.

How often do you use your phone while driving?