The Alberta government’s contact tracing app, known as ABTraceTogether, launched back in May 2020. According to the latest data from Alberta Health, the province still has contracts with IBM and Deloitte for the app, with spending set to reach $4.3 million by the end of 2021, reports CBC News.

Despite 317,000 downloads of ABTraceTogether, only 158 people have used the app to enter positive COVID-19 test results, from the time the app launched in 2020 to last week, according to Alberta Health data.

To date, over 305,000 people have tested positive for COVID-19 in Alberta since the beginning of the pandemic.

CBC News filed a freedom of information request to Alberta’s health ministry, to obtain the data. Originally, a request in August was denied by health minister at the time, Tyler Shandro.

In comparison, Canada’s COVID Alert app has seen 6.69 million downloads as of October 5, 2021, with 35,590 one-time keys used to issue alerts to others. COVID Alert cost the federal government $3.5 million in 2020-21 alone, but new numbers have yet to be shared for the current fiscal year.

Provinces such as Alberta and B.C. opted not to leverage the COVID Alert exposure notification app, which utilizes a framework developed by Apple and Google for iPhone and Android smartphones.

Alberta Health is under a $1.7 million contract with Deloitte until the end of 2021, while IBM’s maintenance and support contract is at $2.6 million. 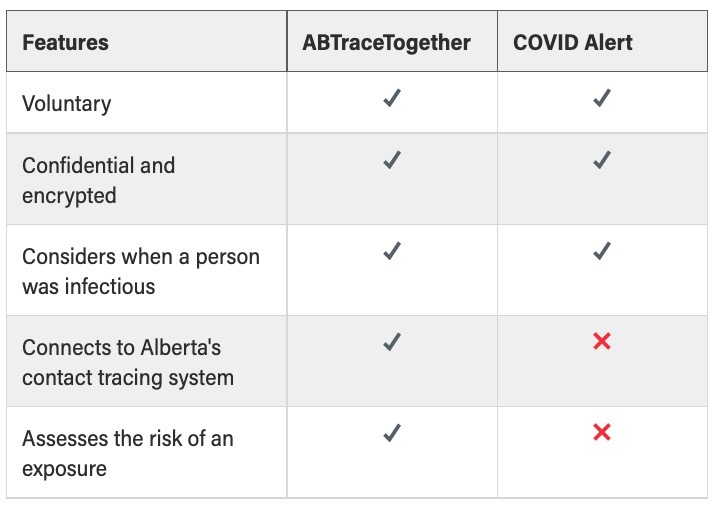 Last July, ABTraceTogether was deemed a “security risk” on iPhones by the Office of the Information and Privacy Commissioner of Alberta (OIPC), as the app required devices to have screens on and unlocked for it to work properly, unlike Apple and Google’s exposure notification framework that allows for Bluetooth to be used in the background.

In August of last year, Alberta said it would be switching to COVID Alert and ditching ABTraceTogether, an app based on Singapore’s contract tracing app model. Since that announcement, the province has not made any switches over to the federal exposure notification app, yet.