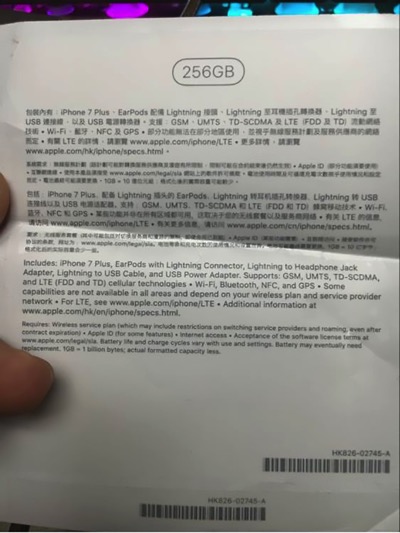 Just a week ahead of the anticipated Apple event, a new image has been shared on Chinese microblogging site Weibo, allegedly showing the specs of the upcoming iPhone 7 (via MacRumors).

The image shows a specs sheet of the iPhone 7 Plus, and apparently confirms earlier rumours of a new storage option available with the new model: 256 GB. But there are other tidbits as well, such as the inclusion of Lightning-equipped wired EarPods and the rumoured Lightning-to-3.5 mm headphone jack adapter.

This picture is the latest in a series of leaks possibly revealing the specification of the iPhone 7. It could also serve as confirmation of earlier rumours, such as Apple eliminating the 3.5 mm headphone jack to switch to an all-in-one Lightning port. Of course, you should take this image leak with a grain of salt, as its impossible to verify its authenticity.

It is worth adding that Apple was granted EAEC certificates for “AirPods”, another rumoured product, a set of wireless in-ear headphones, which will likely be sold as a separate accessory.

Apple has announced that it will hold a media event on September 7. Rumour has it the new iPhones will be available for pre-order two days later.