So I got tagged to participate in the ALS ice bucket challenge by our very own Kris Meador less than 24 hours ago.

Check out his video below:

Okay, so there’s no video of me dousing myself in ice water (for shame, right?), but rather we’re going to make our wallet feel the freeze with donations instead! Below is a screenshot of our donation to ALS.ca (they have raised 88% of their goal towards $3 million in donations): 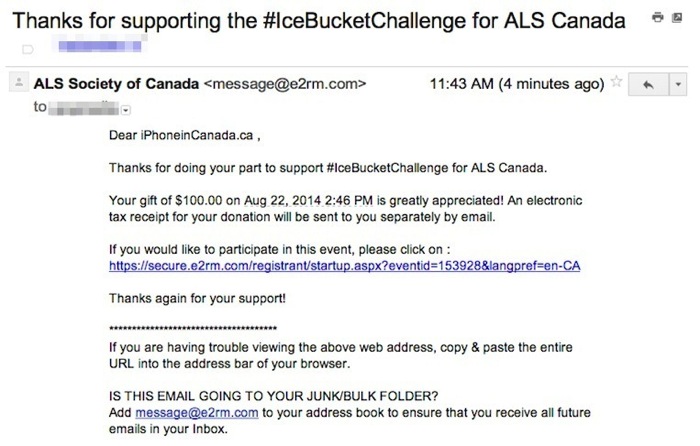 Now is where the fun begins, as we’re going to put our money where our mouth is and challenge…YOU, our loyal readers to participate in the iPhoneinCanada.ca ALS ice bucket challenge to fight this fatal neurodegenerative disease, which has no cure or treatment yet.

How to enter to have $100 donated to ALS on your behalf:

We will donate $100 to ALS on behalf of the first three people ($300 total donations on behalf of the iPhoneinCanada.ca nation). Check out our Twitter timeline and @ replies to see if you’re still in the running.

This is the reason why people are doing the ice bucket challenge if you weren’t aware—Pete Frate’s story:

BUT WAIT–THERE’S MORE: We are tagging the PR teams from Rogers, TELUS and Bell to take the ice bucket challenge or to match our total donations! Please let them know about this contest! 🙂