Update: Looks like the coupon code has expired. Try this similar Aukey Dual USB car charger–it’s the same price at $12.99, but just a bit bigger (and 2.1A per port, not 2.4A)

If you’re looking for a USB car charger for your iPhone, iPad, or any other device such as an Android phone, check out the following deal from Amazon.ca for Aukey’s charger. By using coupon code 6HHMVUC2, this brings the price down to $12.99, saving you $7 from the regular price of $19.99. 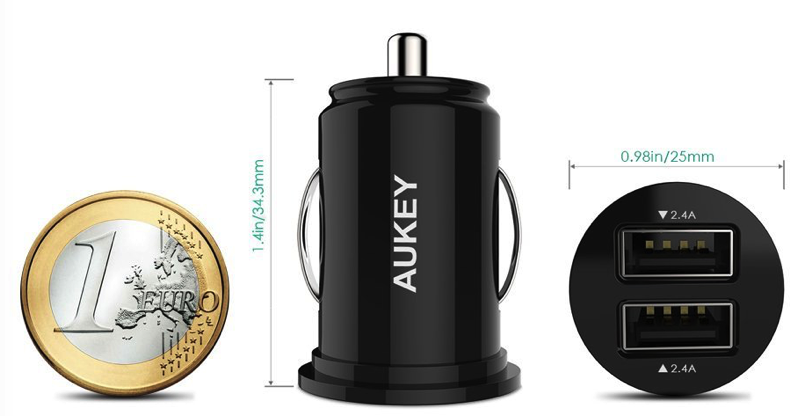 Aukey’s dual USB car charger with comes with two ports capable of each providing 2.4A of power (24W). The company claims their tiny device is the ‘smallest in the world’ as it fits into any cigarette car adapter. With dual 2.4A of juice, it will meet the higher requirements of the iPad so it charges faster (and your iPhone 6 Plus).

The unit contains LEDs that confirm a USB connection and while safeguards are also in place with its over-heated, over-current, over-charging protection circuit, which also ensures charging stops when your device battery is full.

If you’ve been waiting for a decent high powered dual USB car charger, this looks like the one. RedFlagDeal forum members are jumping all over this, so you know it’s a good deal. I’d buy this today but I already have a USB car charger. Aukey is a decent brand and reviews are pretty positive on Amazon.

Click here to jump on the Aukey Dual USB Car Charger while it’s still on sale. Remember, you must use coupon code 6HHMVUC2 during checkout to save the extra $7.