Amazon Canada to Create Over 2,000 New Jobs in British Columbia

As part of its continued investment in British Columbia and Metro Vancouver, Amazon Canada has today announced its plans to create more than 2,000 new jobs through an expansion that includes five new buildings i.e. a fulfilment centre, sortation centre, and three delivery stations. 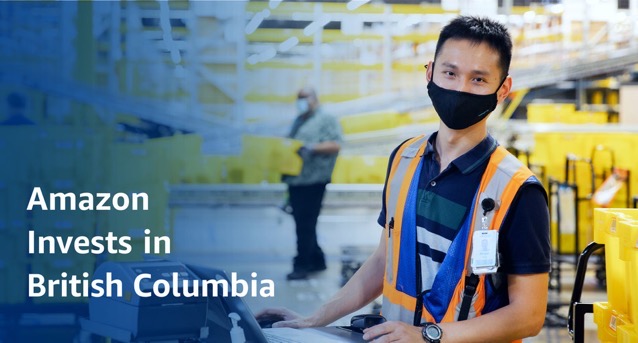 Amazon currently employs more than 5,500 full- and part-time employees in operations, corporate and technology positions in BC and has invested more than $3 billion in the province over the last decade.

The retails giant is launching the following five new sites in BC:

“We’re thrilled to expand our network in British Columbia to better serve our customers while offering our employees bright, safe careers with on-the-job training and upskilling,” said Sumegha Kumar, director at Amazon Canada.

“This expansion by Amazon is an endorsement that British Columbia is a desirable place for a global company to make a long-term commitment,” said Ravi Kahlon, Minister of Jobs, Economic Recovery and Innovation. “We welcome the career opportunities created for people and families, and the chance to showcase to the world the amazing products from B.C.’s small- and medium-sized businesses.”

As per Amazon Canada’s first SMB Report, Canadian sellers on Amazon grossed more than $2 billion on Amazon’s stores around the world.