As part of Amazon Canada’s Black Friday sales, they have discounted their Kindle readers. The new touchscreen Kindle is available for $15 off at $64, while the Paperwhite with built-in light is available for $20 off at $119—both come with free shipping. 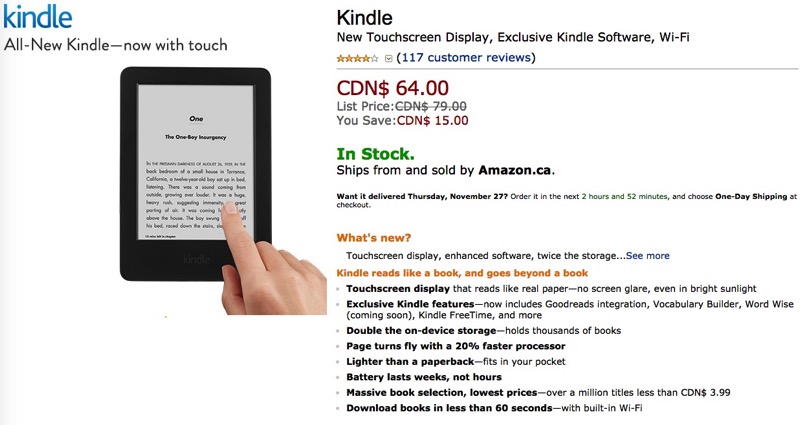 Amazon Canada rarely discounts their Kindles unless it’s around major shopping seasons so if you’ve been waiting to jump on one, now is the time (it’ll also make for easy Christmas shopping).

I own the first generation Paperwhite and the front-lit light is pretty nice as it’s easy on the eyes after staring at LCD screens all day. Be sure to frivolously splurge on the (overly expensive) Kindle Paperwhite Leather Cover (I love mine), as it makes for easier reading thanks to its auto wake and sleep. With Amazon’s Whispersync technology, I can pick up where I left off from any Kindle book in my library from my iPhone or iPad seamlessly.

Last year we saw the Kindle go on sale for $49 for Black Friday, but that was the older generation, unlike this newer touchscreen model with double the memory and better performance. So this year you’ll be paying $16 more for newer tech, so it’s something you’ll have to consider.

Click here to jump on these Kindle Reader sales while they are still available.