Earlier this week, Amazon.ca launched a new Rewards Mastercard in Canada, offering an introductory 5% back for up to six months, with a regular rate of 2.5% back afterwards.

The new Mastercard is a partnership with TD’s MBNA, offering Prime members 2.5% back on purchases made on Amazon.ca, Whole Foods Market in Canada and at restaurants and grocery stores.

Less than a week after launching, the Amazon Rewards Mastercard is no longer accepting applications, temporarily, as shown on their site: 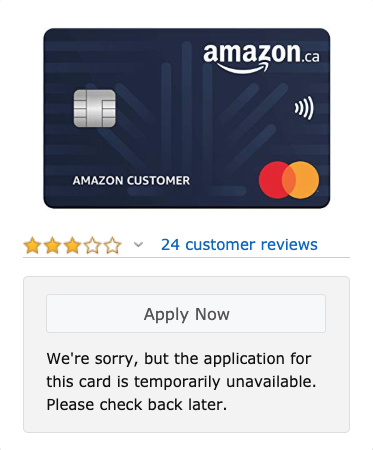 “We’re sorry, but the application for this card is temporarily unavailable. Please check back later.”

Some Amazon Mastercard users, who had been instantly approved for the card, have also seen the card disappear from their Amazon account wallet, with no explanation at all from customer service agents.

What’s the issue? An Amazon spokesperson told iPhone in Canada in a statement, “the Amazon.ca Rewards Mastercard is not currently accepting applications and some customers who were approved for the card are having difficulty using it.”

There was no explanation on what kind of challenges customers are facing with this new Mastercard.

“We are actively working on resolving these issues,” added the Amazon spokesperson.

If you had applied for the Amazon Rewards Mastercard and you no longer see the card, it should come back soon at some point.

So far, the Amazon Rewards Mastercard has received 24 customer reviews, averaging 2.8 out of 5 stars.