According to a new analysis of over 32,000 products and around 65 million reviews, Amazon has started deleting “Incentivized” product reviews from its website, TechCrunch is reporting. The company had announced last month that it will soon ban such reviews, in an effort to address the growing problem of less trustworthy reviews that had been plaguing the retailer giant’s website. 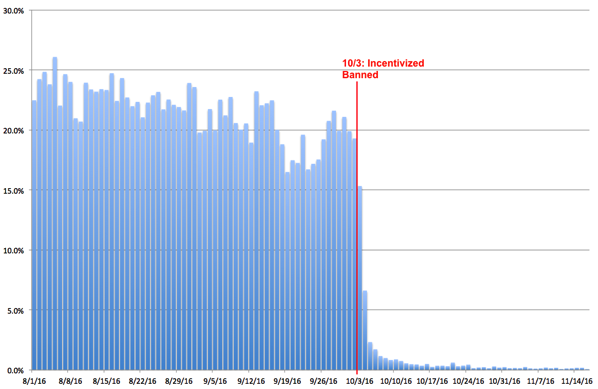 For those who don’t know, the term Incentivized refers to those reviews where the vendor offers free or discounted products to reviewers, in exchange for recipients writing their “honest opinion” of the item in an Amazon review. Data has however shown that these reviewers tend to write more positive reviews overall. Over the years, these reviews have proliferated on Amazon, and have damaged consumers’ trust in the review system as a whole.

ReviewMeta checked up on Amazon’s progress by analyzing its own dataset of around 65 million reviews across 32,060 products in all categories.

It found that Amazon had deleted over 500,000 reviews, 71 percent of which were incentivized. The average rating for these deleted reviews was 4.75 stars – clearly much higher than the typical average. Some products even saw thousands of reviews removed – like this cosmetic scrub, which had 9,000 reviews removed, for example.

Across the over 10 million reviews analyzed (a dataset based on those consumers entered on the ReviewMeta website), only 1.5 percent of the reviews were incentivized.

Amazon’s ongoing effort has led to the number of incentivized reviews dropping significantly, which has in turn also lowered the average rating for all reviews.