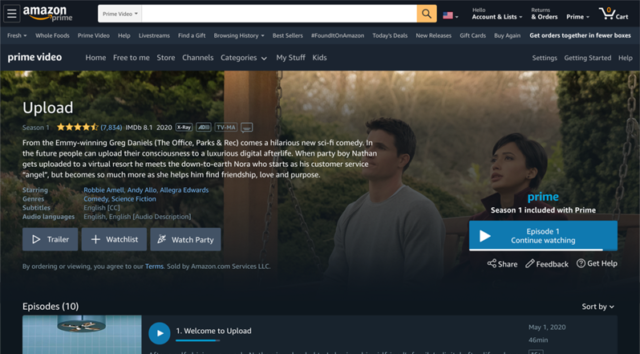 Amazon is expanding its Prime Video “Watch Party” feature to non-Amazon smart TVs and streaming devices. Moving forward has now become easier to sit down and remotely watch an episode of a series or movie with friends and family.

Previously, the Prime Video Watch Party function was exclusively available on Fire TV devices, the Prime Video app on iOS and Android. Plus, users could take advantage of it through a browser. However, those without a Fire TV device were left by the wayside. As TechCrunch reports, that appears to no longer be the case. Now, viewers can set up a Watch Party on a number of smart TVs, streaming devices, and even an Xbox or PlayStation console.

Amazon’s Prime Video Watch Party first got legs during the early days of the pandemic. While the company had been testing the feature on Twitch with select streamers, it wasn’t until everyone was stuck inside that Watch Party became such a success. In 2021, Amazon expanded support to Fire TV devices.

Amazon isn’t the only streaming service to enable this type of viewing experience. Disney+ offers its GroupWatch feature, which offers similar functionality.

Texas Heart Institute researchers studying the use of Apple Watch in helping diagnose heart attack symptoms have just published their findings in the latest edition of the Texas Heart Institute Journal (via MyHealthyApple). According to the research, if the ECG function of the Apple Watch could provide a reliable analysis of myocardial infarction (MI) risk when...
Usman Qureshi
3 hours ago

Samsung VP Bryan Choi has said in an interview with The Times that the latest Galaxy Fold devices will be the company’s “secret weapons” in its fight to capture a share of the high-end mobile market. Choi said Samsung’s strategy is to make the range of foldable devices a “mainstream product, with sales equal to...
Usman Qureshi
4 hours ago