Amazon.ca is trying to lure more people to sign up for Prime memberships ahead of their member-only Prime Day sale, which starts early on July 10, ahead of its official July 11 launch.

Today’s Deal of the Day just for Prime members is the Kindle Paperwhite, on sale for 29% off at $99 for the Wi-Fi version, saving you $40. This is the lowest price for the Paperwhite on Amazon.ca according to price tracker CamelCamelCamel. 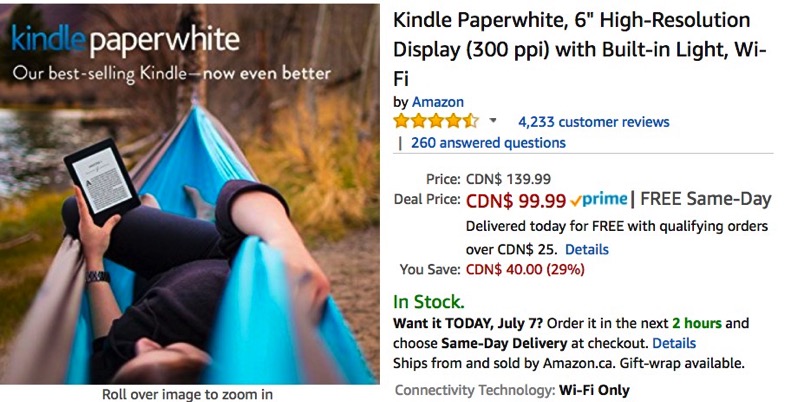 What makes the Kindle Paperwhite so great versus other e-readers is the fact the built-in light is front lit, versus back lit, saving your precious eyes at night. Amazon’s WhisperSync means your bookmarks are saved to the cloud, so you can pick up and continue reading from any device, such as your iPhone or iPad.

Normally, Amazon discounts the Kindle Paperwhite for only $20 off a couple times a year, but this $40 discount doubles that, making it the best time to jump on one if you’ve been sitting on the fence.

Click here to jump on a Kindle Paperwhite while the Deal of the Day is still on—there’s just under 14 hours left to go.