Amazon Student Members Can Save $40 Off New Kindle Paperwhite

If you’re not an Amazon Student member yet, you may want to consider joining to get a pretty good deal on Amazon’s latest Kindle Paperwhite.

This week the company launched a sale where the latest 300ppi Kindle Paperwhite models get $40 knocked off (until September 30 only): 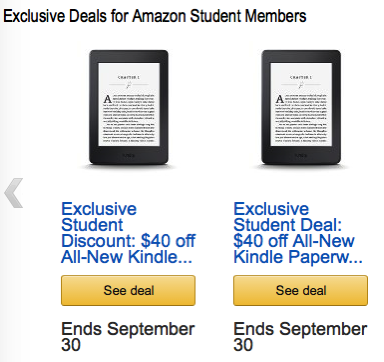 Typical Kindle Paperwhite sales are usually $20 off only, but this doubles that, and is the best price we’ve seen. The front-lit Kindle Paperwhite means less eyestrain and makes it a joy to read in low light, versus an LCD display.

With Amazon’s Whispersync feature, you can start a book from anywhere such as the Kindle iOS app, and seamlessly switch back to your Kindle without losing your place, as bookmarks sync wirelessly.

Amazon Student is the company’s plan to get university and college students to jump on a discounted version of their Prime program, which offers unlimited two-day shipping on items fulfilled by Amazon. First time users get a six month free trial, then only pay $39 annually, which is half the cost of a regular Prime membership.