Amazon has today announced the release of its new Test Simulator (Beta), a tool that allows developers to test their Alexa skills without owning a device. The simulator expands existing testing capabilities such as text input, JSON debugging, and visual display by adding features like the ability to test multi-turn conversation, dialog management, and much more. 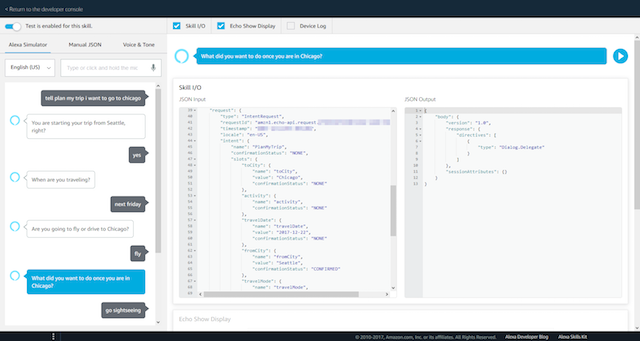 According to Amazon, developers can validate Alexa’s understanding of the spoken word and how the skill responds with the simulator’s new voice input capability. The new dialog style UI pattern helps keep track of the interaction with Alexa and allows for easy inspection of relevant debugging information.

The new device event log shows the directives that are sent to the devices, which allows you to understand how the skill interacts with the device.

To further improve programmatic automated testing, we are also enhancing the skill-testing API to support features such as entity resolution and dialog management. These enhancements will roll out in the next week. Learn more about the skill testing API and how to use the CLI with your skills.

Amazon says the visual display testing capability for Echo Spot will be available next year. To learn more and start testing your skills for Echo devices, click here.