Some say it’s the little things in life that bring joy, and one of them in my mind is a 6-foot/1.8 metre long Lightning USB cable. There are times when our iPhones need a recharge but we want to keep using it on the couch—that’s when a longer cable can really pay dividends.

Amazon.ca has its Cyber Monday deal on AmazonBasics (their own branded cables) Apple-certified (MFi) Lightning USB cables, and a two-pack of 6-foot/1.8 metre long cables can be had for the low price of $4.12 CAD per cable (61% off), if you’re a Prime member (non-Prime price is $5.50 each, still good). This is the lowest price ever on Amazon for these 6-foot long cables.

As you can see below, Prime members save an extra 25% off cables, available in a variety of lengths in black/white. But the best deal, in our opinion is the 2-pack of 6-foot/1.8 metre long cables, which will make killer stocking stuffers. 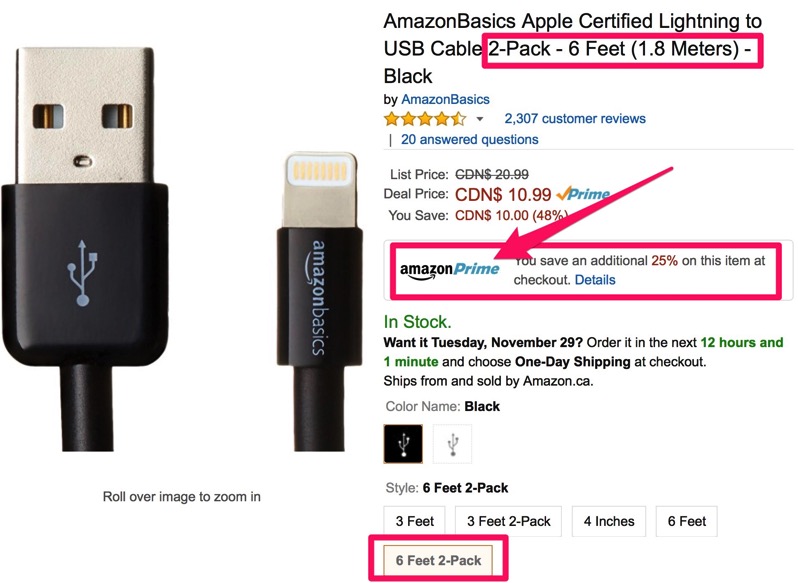 Prime members actually get to save an extra 25% off all AmazonBasics items, which range from batteries, household goods and more.

If you’re not a Prime member yet, you can sign up for the free month trial, then order and get the deal. You have 30 days to cancel your membership so if you decide Prime isn’t for you, then nix it and you won’t be charged once the trial is over.