Study Reveals Americans Spend 58 Minutes On Their Smartphones Each Day

According to the latest data from Experian Marketing Services’ Simmons Connect, adult Americans clock an average of 58 minutes on their smartphone devices each day. The study reveals that smartphone owners spend 26% of their time on a phone talking and another 20% texting. Similarly, social networking takes 16% of an average American’s smartphone time while browsing accounts for 14% of time spent. 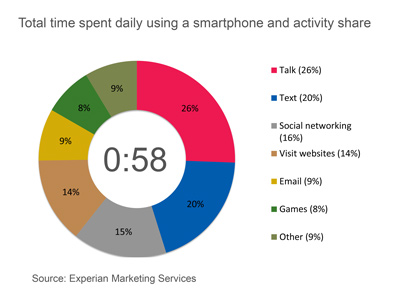 It is interesting to note that playing games accounted for only 8% of daily smartphone time. Even more surprising is that an activity like watching video accounts for less than 1% of a typical adult’s daily smartphone use. A chart (given below) provides additional insights into the time spent engaging in major smartphone activities. It must be noted that the chart examines only those individuals who engaged in each activity during a 24-hour period. 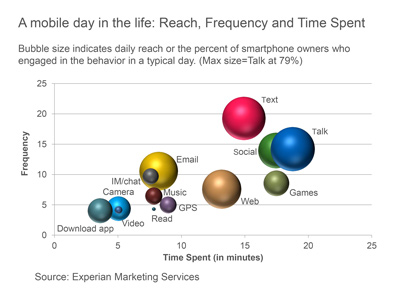 For more information on consumers’ usage of smartphones, take a look at Simmons Connect.