A national online Reuters/Ipsos poll shows strong support for Apple among Americans for its decision to challenge the demand to circumvent its own security system and unlock an iPhone 5c used by San Bernardino shooter Syed Farook.

The poll has found that 46% of respondents agree with Apple’s position, while 35% sided with the FBI, and 20% said they didn’t know. Responses to other questions revealed that Americans don’t want the government to have access to their phone and Internet communication, even if it is done to prevent terror attacks. 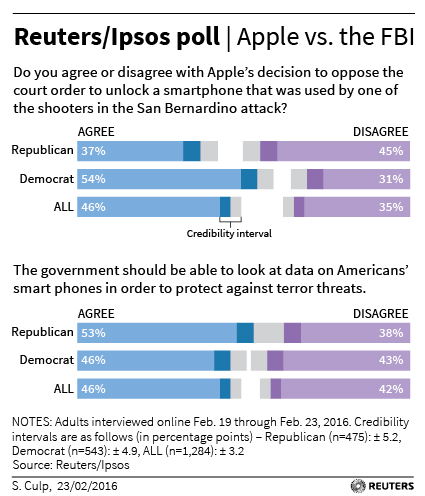 Actually, this isn’t exactly new: The results are similar to those from a poll conducted three years ago which revealed that Americans wanted to keep their phone, Internet communications, and other data private.

On the other hand, when asked whether the US government should be able to access data on Americans’ phones to protect against terror threats, 46% said yes, 42% said no, and the rest weren’t sure.

As the Reuters article points out, young Americans are more likely to support Apple’s position than are older ones. Among those aged between 18 and 39, 62% agreed with Apple’s stand.

Interestingly, the poll shows that while “Americans are very distrusting of everybody”, they “actually trust Apple a bit more than the government in some issues”, Ipsos pollster Chris Jackson said after analyzing the results.

The Reuters/Ipsos poll counterbalances a Phew poll published earlier this week, which found that 51% of Americans are siding with the FBI and saying Apple should open the iPhone.

Apple CEO Tim Cook will add more colour to Apple’s stand in an interview with ABC World News which airs tonight at 6:30 EST.