An Insider’s Look at Working at the Apple Store?

Here’s an interesting Saturday read. An employee of an Apple Retail store has documented his/her ‘hate’ for working at Apple. The blog, titled “Welcome to the crApple Store” goes into detail about how working at the Apple Store is the worst job in the world. 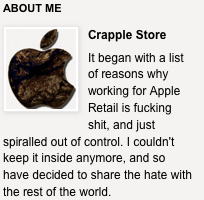 Now, I know a few people who do work at Apple Retail stores and they have never showed such hate like this blogger. Here’s an excerpt of his/her hate for Ron Johnson, Senior VP of Apple Retail Operations:

This is the guy responsible for all the stuff that goes on in Apple Retail. If you’re doing repairs until midnight, I’m pretty sure it’s cos this guy hates your wife and your social life. It’s people like this that think they’re the ones who have made Apple so much money, they honestly believe they know what goes on in stores. And I’m sick of his f**king voice, and face, in all those sh*t videos you have to watch during the brainwashing sessionsÂ store meetings.

Here’s an image of the life-enricher in a retail store during the iPad launch. The image may or may not have been tampered with. 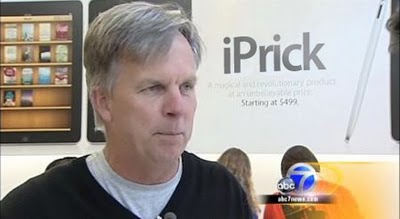 I’m not sure if this blog is actually real or not, but whoever is behind it is leading a very negative and toxic life. If you don’t like your job–just quit.

What do you think of this blog?