Gudak is a new analog camera app for iOS developed by Korean startup Screw Bar, that gives you a roll of 24 photos to take through a tiny viewfinder modeled after a disposable Kodak camera. But the thing that truly sets it apart from the tons of other analog camera apps is that once you’re done taking photos, you need to take your roll to the “Processing Laboratory” where it’ll develop for 72 hours (via The Verge).

“No matter how beautiful a photo is, it is just a memory of something and an ‘hommage’ of a moment and our team has intended to reproduce that memory and moment by eliminating the Instant Review feature of conventional digital cameras and reducing 95% of the conventional viewfinder feature, leaving only the least for taking shots.”

While you need to wait 3 days before it lets you start a new roll or to view the photos you have taken, you can play with your phone’s date in the Settings to trick the app into thinking it’s three days later. Although that pretty much destroys the spirit of the app. 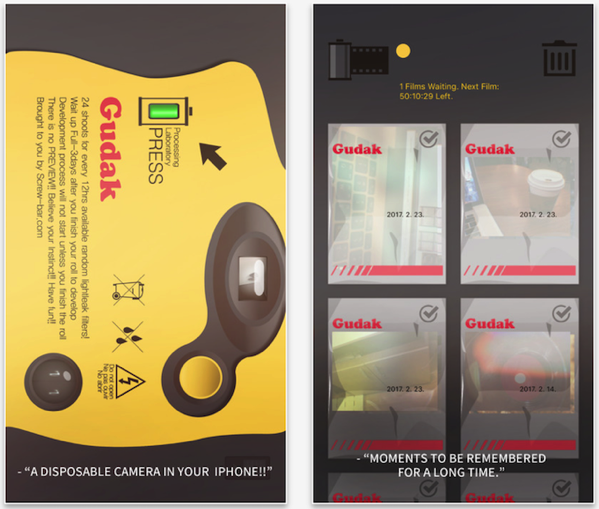 Since the app is only a few weeks old, a bunch of updates to the UI are expected to be rolling out soon, with developers already responding to complaints that the viewfinder is too small. You can grab it for $0.99 using the following App Store link.