Here’s What Analysts Are Saying About the iPad Event 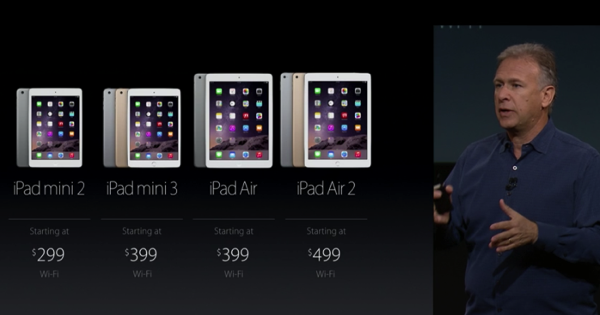 Apple’s iPad event brought solid updates to its tablet line, but no surprises: the rumoured Touch ID and the more powerful A8X processor designed for the iPad Air 2, a 27-inch iMac with Retina 5K display, an announcement of Apple Pay availability. How did analysts reacted to this event? Fortune’s Philip Elmer-DeWitt has done an early roundup.

Brian White of Cantor Fitzgerald was impressed with Apple’s product upgrade, and he believes Apple is in the midst of what he sees as a “super cycle” that he expects to keep the stock price in an “upward trajectory”.

Other analysts, such as William Power of Baird, weren’t as impressed, mentioning there were no surprises. He did express the importance of Apple Pay, which will go live on Monday alongside iOS 8.1.

“Apple held an event in Cupertino to announce its latest iPads and iMacs, which were largely in line with expectations. Perhaps more significantly, Apple Pay is scheduled to go live on Monday, opening a new chapter for the Apple ecosystem… The company announced that it now has 220,000 U.S. retail locations and 500 banks on board to support it at launch. That said, it’s still missing many big-name retailers, which could limit adoption out of the gate.” Outperform. $112.

Gene Munster of Piper Jaffray says the updates impact almost a third of Apple’s business, so it was an important step to take.

Analysts remain positive about Apple Pay, although some “fear” limited availability: the company has more than 200,000 partners in the US, and since last month’s announcement, another 500 new partners have joined the initiative.

The majority of analysts rate Apple a buy or overweight, with price target set between $112 and $120.

WhatsApp has finally introduced a new feature that makes it easier to message yourself, by allowing you to send notes, reminders, and shopping lists to yourself for easy access (via TechCrunch). The feature called ‘Message Yourself’ is set to reach all iPhone and Android users in the coming weeks. The feature was previously being tested by select beta users,...
Usman Qureshi
18 mins ago

Apple has shared a handy new tutorial on its YouTube support channel, detailing how iOS 16 lets you use a Memoji sticker as your profile picture in Contacts. You can easily create a Memoji in iOS to match your personality and mood, and then send it in Messages and FaceTime. With a compatible iPhone or iPad...
Usman Qureshi
32 mins ago